This interview with “Clockwork Watch” founder and visionary Yomi Ayeni is making its appearance just in time for the year-end holidays!

What were the influencing factors and/or your motivation for deciding to explore collaborative world building and storytelling?

I dabbled with collaborative world building when we produced Breathe in 2009. One of the most exciting elements was seeing how participants became co-creators and I the producer became a participant. This was a new experience for me and one I promised to explore in my next project, so here I am. In “Clockwork Watch,” we’ve set out to tell a love story in a retro-futuristic universe, which initially seemed clear cut, but for one fact – steampunk is still an emerging genre, and you soon realise everyone has a different take on what it is.

Our story starts at a point in history that we call before the ‘steam-pocalypse,’ at a time when mechanics and clockwork devices were the dominant form of technology – no plasma guns, no nuclear, etc. We’re asking participants to help create a mechanical universe, and grow it into world that steampunk fans are familiar with, in terms of technology. We’re also tackling environmental pollution in a bid to explain why the world is polluted.

How would you describe “Clockwork Watch?”

“Clockwork Watch’ is a collaborative transmedia storytelling project set in a retro-futurist steampunk vision of Victorian England. Launched in May 2012, this five-year immersive participatory story, is told through graphic novels, interactive promenade theatre, online adventures, a book, and a feature film.

What were some of the inspirations for creating the “Clockwork Watch” world?

I organize events in the UK, one of my gigs is called Seductive Alchemy, a steampunk concept. Now, I’m black – yet most of the people at my event don colonial garb and try recreating an environment that is bordering on hostile to non-caucasian participants. I believe that’s why you do not find many black or Asian people in similar role-play events. If you’re going to do make-believe, at least create something that doesn’t alienate part of the audience. So that’s what we’re trying to do with “Clockwork Watch.”

Obviously, “Clockwork Watch” is a transmedia property as well as an SSW (well done!). How do you see these two approaches to storytelling and worldbuilding relating to each other?

Transmedia is all about telling story across mediums, participation, and audience engagement. These aspects go hand-in-hand with the type of work that I create. Yes, my stories act as a guide, setting the tone, pace, touch and feel, but they also inspire people to collaborate. This in itself fuels the desire to break things, to probe boundaries, to explore and to help shape the storyworld.

For me the participation should go to the very heart of story creation – as in to incorporate more experiential opportunities – which help build the storyworld, which is something we did in my last transmedia film Breathe. If people are going to participate in a make believe space, I believe you should give them the tools to help build unique and inter-personal experiences. There’s a lot of new stuff we’re going to introduce in Clockwork – we hope we’re ready to handle the madness participants throw at us.

How do you view the relationship between world building and storytelling? Does one drive the other?

I believe they go hand in hand. When I first started writing this answer I suggested otherwise. Now that we are knee-deep in world building and storytelling, they are hard to differentiate. We’ve created a world that suits a story, then the story takes over and defines the world. When the co-created elements start to impact on story and world – it becomes hard to separate the two.

What have you learned about storytelling through collaborative world building (and vice versa)?

It’s a tough job. The Clockwork story is a grassroots project with lofty ambitions. Keeping tabs on all elements, while assessing contributions in the hope you can guess how they may impact on the story, is a major undertaking. In our experience it would seem that people are more interested in storytelling, as opposed to world building. But with a bit of patience the contributions start to impact on the world, so we’ve been able to extrapolate the right amount of content to explain instances in the world.

What were some of the website design considerations you had to incorporate as a result of “Clockwork Watch” being a shared story world?

We’re struggling on this. The first incarnation of our site has been a newspaper. We wanted more functionality, but costs dictated that we have something basic. In retrospect I think this may be a mistake, as the site is quite content heavy, and we’ve had some feedback about this.

The problem is we’re presenting everything as a news story, or letter, the world is being created through a newspaper and the word count is quite staggering, but we’re making changes. The second act of Clockwork will be more visual. I guess we initially thought people would contribute pictures, more videos and audio, but most of the content is textual. We love this, but not every contributor/reader/audience member does. The best review we’ve had so far was by the Steampunk Tribune. I’m glad to say they understand what we’re trying to achieve.

Can you share a pleasant surprise you have had with “Clockwork Watch?”

The best so far has been the birth of our first baby. Laser Lace Letters is the first independent project to launch from inside our storyworld. It’s an artifact-based short story series, with quite a bit of handcrafting attached. The project is the brainchild of Haley Moore of Texas.

What was an unexpected challenge with “Clockwork Watch?”

How much work I’ve had to do, and how big the project has become. I’m not sure how I wrote the production bible – something we’ve stuck to – and yet still didn’t realize the scale of this baby. Clockwork is BIG!

How much of “Clockwork Watch” content is available for free (and how is paid-for content accessed – subscription? work-basis?)?

The entire online story / storyworld is free, graphic novels ar £10 each, tickets to our live events depend on the venue and production costs.

How can people participate in “Clockwork Watch?”

Main point of engagement is through our online portal – The London Gazette – a Victorian newspaper. Participants are invited to create characters and use them to make creative adjustments to our story. This can be done by contributing a articles, photographs, videos, letters, or even drawings, each showing how our news affects a character living in the “Clockwork Watch” world. The best submissions following our arc will be given Canon status, incorporated into the universe narrative, and the authors will be awarded a contributors credit on the website. This makes our online portal a co-created storyworld made up of an original narrative and contributions from participants. Each contributor retains legal ownership of their respective contribution, and we’re pleased to announce that people are already using our creative sandbox.

Can contributors make money? If so, how?

Haley Moore raised almost $18,000 through Kickstarter for her Laser Lace Letters project. Although the storyworld has a Creative Commons Attribution-NonCommercial-ShareAlike 3.0 Unported license, that’s to protect people from being scalped by unscrupulous opportunists. We hope to have helped launch stories, businesses and even new careers when this is over.

You mentioned contributors retain legal ownership over their works that you accept (and clearly creatives like Haley can make money by referencing or building on the existing “Clockwork Watch” world). Can a contributor’s work be used by another contributor (i.e., can fans remix others’ contributed works)?

Can you describe what happens to a submission? What’s the review/editing process like?

It’s quite straight forward. Submissions are checked to see whether they fit the current story arc, if not – as in some cases – the content becomes a letter reacting to the news story. Whereas when a contribution fits the current story arc, it is presented as an article by a staff writer, and given Canon status. So far we’ve made a few grammatical corrections, and no  content edits! 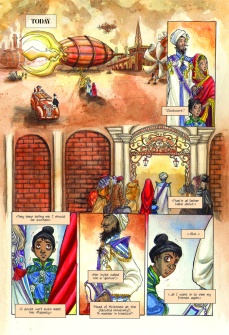 What tools or systems are you using to track revenue sharing and rights managements for contributed content?

We haven’t done much of that to date. In the next few months we’ll be rolling out our first product, and then we’ll be able to answer this question.

How did you approach pre-launch and post-launch marketing for building awareness and an active audience?

We haven’t done any marketing at all. We don’t have the budget. In fact the whole project has been managed via our online interactions. This is made a bit more difficult by not using Twitter, Facebook or social media to tell our story. We decided to take the Victorian approach and make “Clockwork Watch” a storytelling mechanic, mainly focusing on interpersonal interactions – we want people to connect, share and contribute – this will mostly be done in person, or through writing.

What advice would you offer someone starting or managing a shared world?

Get some financing, it’s a hard gig! Know your audience, set a realistic pace for telling the story, make sure people understand what you’re trying to achieve, and signpost as much as possible. We have a lot of people who want to dress up and go to live events, but that is just one element of the experience.

What are some of the more popular or interesting storylines happening in “Clockwork Watch?”

We’re working towards our next big event, which will be a follow on from an experience we’re planning to host in Canada. There’s going to be a world changing development, in fact something  we hope impacts the understanding of the whole Steampunk aesthetic.

How do you balance internally-generated content (that keeps things interesting/dynamic but can dramatically alter the world) with the need to provide contributors a relatively stable world foundation?

We have a well balanced mechanic. Most content is made live, but only specific stuff makes it on to the front page. Just like in the newspapers, some stuff is best suited on the Comments Page, some in Letters, then you have articles, and some more on the front page. We’re building a world, and it comes in all shapes and sizes.

What mediums would you like to see in “Clockwork Watch” (or see more of)?

No more!!! We’re using graphic novels, live events, online, role-play, a book and a film. Anymore and I will break!

What is your view about the future of collaborative commercial entertainment? Has it changed since you started “Clockwork Watch?”

We’re working with a couple of small brands, who have been very accommodating in letting us tinker with, and integrate products into our story. We’re about to start talks with a major drinks manufacturer – fortunately they have a well documented Victorian heritage – and we hope showing them what we’ve achieved so far gives them the confidence to let us have creative freedom. “Clockwork Watch” is still a grassroots project, and I’m glad to say we’ve racked up £80,000’s worth of interaction, content and engagement on the generous £6500 that was raised through IndieGoGo.

One thought on “Interview with Yomi Ayeni of Clockwork Watch”